We are happy to announce new mining bonuses released! Starting now, you have the chance to add two more games to your Stash just from turning on your miner. The games part of this latest mining bonus are: Macrotis: A Mother’s Journey & Torment: Tides of Numenera. Who wants free games? 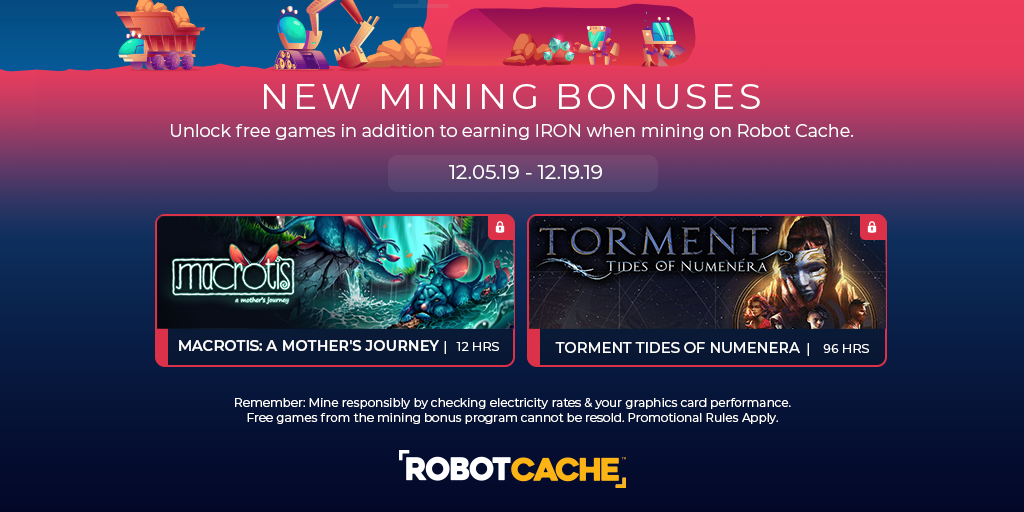 Macrotis: A Mother’s Journey is the first game in our current Mining Bonuses. Mine 12 hours before December 19th, 2019 and get rewarded with this exciting game.

Macrotis: A Mother’s Journey is an unforgettable adventure for those who love being challenged. Go on this deeply emotional journey as Mother Bilby and save your beloved children who got separated from you because of a frightening flood caused by the never-ending rain. Climb, jump, and gnaw your way under the ground in Macrotis: A Mother’s Journey, a 2.5D puzzle-platformer. Solve challenging puzzles by interacting with the beautiful yet dangerous world, while avoiding deadly traps that could end the adventure immediately.

With a host of strange companions you must escape an ancient, unstoppable creature called the Sorrow and answer the question that defines your existence: What does one life matter?

Torment: Tides of Numenera is a single-player, isometric, narrative-driven role-playing game set in Monte Cook’s Numenera universe, and brought to you by the creative team behind Planescape: Torment and the award-winning Wasteland 2.

Mine 96 hours by December 19th, 2019 and you will be rewarded with Torment: Tides of Numenera.